Skip to content
They are so fabulously beautiful that it’s hard to take your eyes off them, and the history of many of them is like a complete film script.

In the second part of a story written in sky blue, you are going to read about unusual gifts and richness that some want to share with others. Who deserved a surprise worth over USD 48 million, and who was willing to pay over 4.5 million to complete his private collection of the most precious stones in the world? We invite you to read about it.

Blue Mooon (of Josephine) — everything for you

Rough Blue Moon, with a weight of 29.6 ct, was discovered in January 2014 in the Cullinan mine in South Africa. Half a year later, the stone’s owner, the Cora International company, presented one of the greatest diamonds in the world—the perfectly clear, weighing 12.03 ct Blue Moon in fancy vivid blue. Until May 2016, this cushion-shaped stone was the most expensive blue diamond ever auctioned. (its place was taken by the famous Oppenheimer Blue diamond, and you can read more about it here)
The Blue Moon diamond set its record in November 2015 during the Sotheby’s auction in Geneva. It was then purchased by a billionaire from Hong Kong for USD 48.4 million. As it turned out, the beloved dad bought this diamond for his several year old daughter Josephine, and after the purchase he immediately changed the stone’s name in the Blue Moon of Jospehine. His love of precious stones is also confirmed by the fact that a day earlier he spent over USD 28 million for a spectacular pink stone, which was also given to his daughter. The pink treasure weighing 16.08 ct was called Sweet Josephine. There is space for one more blue “solitaire”, Star of Josephine – a diamond worth almost USD 10 million, in the little princess’s casket. 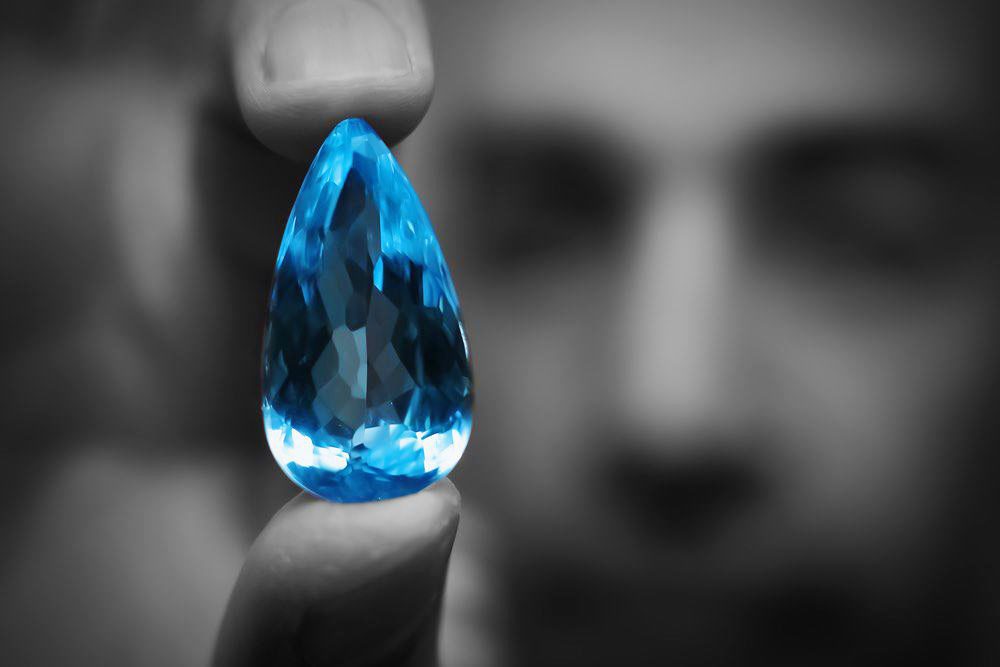 Tereshchenko Blue (Mouawad Blue) — a part of a fabulous collection

The origin of this exceptional stone remains a mystery, and experts are not able to determine where it was discovered. Tereshchenko Blue most probably comes from India and, like in the case of the famous Hope diamond, was discovered in Golconda, in the Kollur mine. Weighing 150 ct, the rough stone was to be secretly sent to Russia at the special request of Michail Tereshchenko, a rich industrialist.
Somewhere around the year 1914, Michail deposited the stone in Cartier’s Parisian office and asked for it to be cut. One year later, the stone, cut in a pear shape and weighing 42.92 ct in the colour of fancy blue, was placed in a gorgeous necklace made of forty six colourful diamonds weighing between 0.13 and 2.88 ct. The necklace made at the request of Tereshchenko remains one of the largest orders in Cartier’s history to this very day.
In the thick of the revolution, after Tereshchenko’s escape from prison, the diamond left Russia, and it probably made its way to Norway. Its story remained unknown for several decades. In November 1984, it reappeared at Christie’s auction in Geneva, where it was sold to a collector and businessman from the jewellery industry, Robert Mouawad, for USD 4.6 million. Its name was changed by the owner to Mouawad Blue, and the stone joined the billionaire’s stunning private collection. It is estimated that the current value of the Tereshchenko diamond may be up to ten times greater that the amount which was paid by Mouawad.

This rough diamond, weighing 100.5 ct, was discovered in the Premier Mine in South Africa in 1908. One year later, it was purchased from the Premier Transvaal Diamond Mining Company by Atanik Eknayan, a French jeweller, and cut in Paris. Next, the heart-shaped diamond weighing 30.62 ct was purchased by Pierre Cartier and placed in an extraordinary necklace, which he later sold to the Argentinian Unzue family. In 1936, Maria Unzue gave the necklace to her niece Angela Gonzalez Alzaga as a wedding gift. In the years 1936–1959, the Blue Heart diamond changed its owner several times. It was ultimately included in Harry Winston’s collection. The jeweller placed it in a ring together with 23 other brilliant cut diamonds. The last private owner of the diamond was Marjorie Merriweather Post, who bought it from Winston and then, in 1964, she handed it over to the American nation as a gift and placed it in the Smithsonian Institution’s collection in Washington. Just as it was done previously by Harry Winston, who gave the legendary diamond Hope to the Institute. (more information about the extraordinary history of the Hope diamond is presented here — link to the first part of the text)    In 1997, the GIA Institute classified Blue Heart as a stone in fancy deep blue with VS-2 clarity.