Despite the fact that it is not among the largest or the most beautiful diamonds, it certainly is one of the most remarkable ones.

Its inscriptions and original cut that resembles a coffin make Shah one of the most distinguishable and fascinating diamonds in the world. What is its story, and who can admire it close up? Let’s take a closer look at it!

Shah takes its name from the Nizam Shahi, a dynasty of rulers from the kingdom of Ahmadnagar, who ruled the state of Deccan in the middle-west part of India between 1490 and 1633. In the course of the centuries, the stone was passed down from one ruler to the next, and new rulers marked it with new inscriptions. In the course of its turbulent history, the Shah was the pride and decoration of the imperial throne, a bloody spoil of war and eventually a gift given to redeem guilt for crimes. Before it got to the Kremlin armoury, where it safely rests to this very day, it travelled a long and exciting way, witnessing all kinds of feelings ever aroused in people by the perspective of power and wealth.

Shah is an elongated diamond weighing 88.7 ct. Its slightly yellowish colour is not something remarkable, but its clarity is. Despite the fact that it has never been assessed in the scope of colour, clarity, carat weight and other features, it is certainly a diamond without any blemishes or inclusions—so pure that the cutter could skip several places as they did not require any cutting! The original rough Shah weighed about 95 ct, and after cutting its weight was about 89 ct. As can be easily calculated, the cutting process resulted in a loss of merely 6 ct, which is undoubtedly an impressive result! 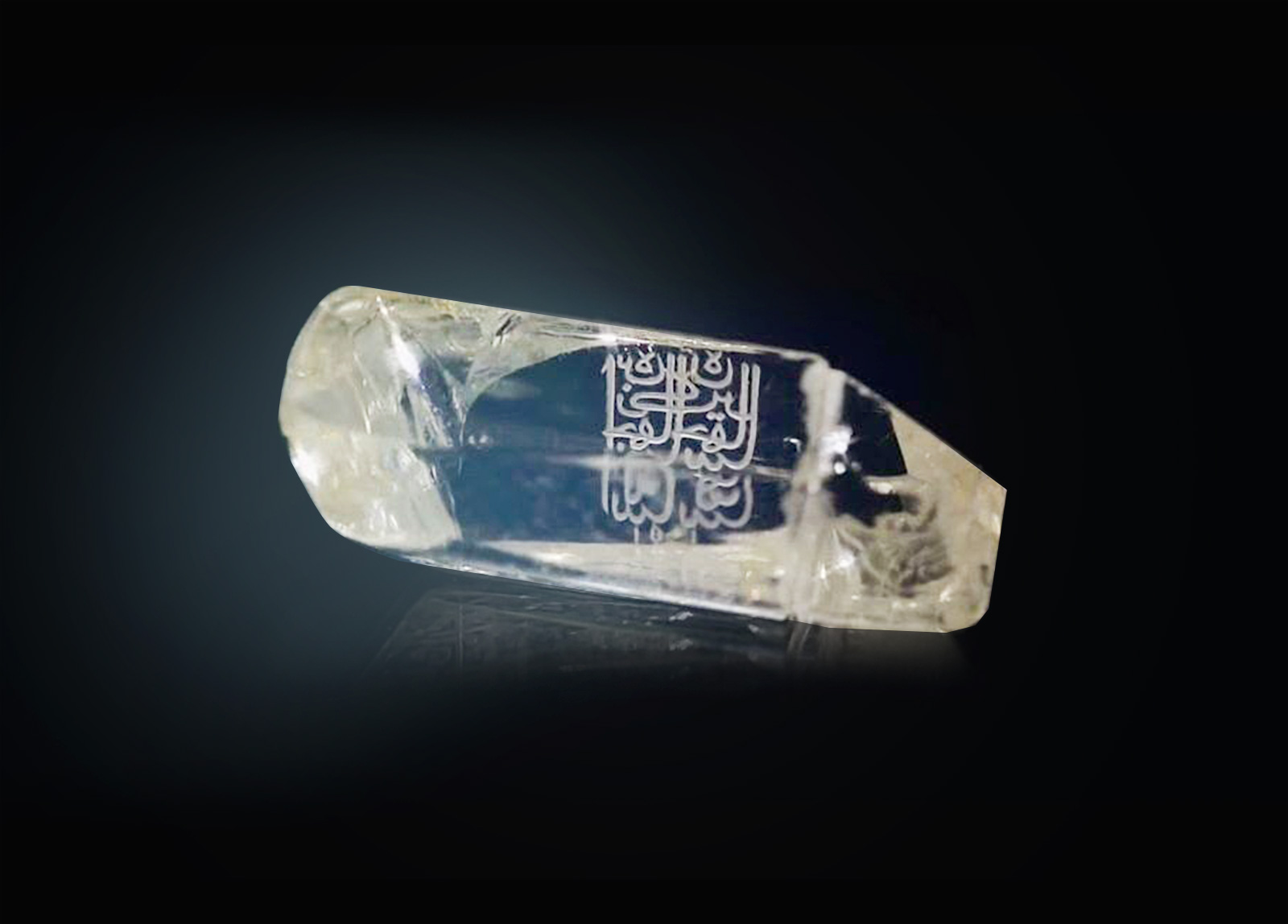 One of the features that make the Shah so special are the inscriptions carved by the subsequent owners. They are not only a form of signature but also clues to its history and its path from India to Russia. Let us trace it back together!

The first ruler who owned the Shah and who carved an inscription on it was Burhan Nizam Shah II, the successor of the dynasty founder, Malik Ahmed Shah. The year 1000 in the Islamic calendar is equivalent to the year 1591 according to the Gregorian calendar. Following the trace of the first inscription, there are many indications that the stone was found in one of the mines in the vicinity of Golconda, an area famous for its high-quality stones. This is where one of the largest diamonds in the world, the famous Koh-i-noor, comes from. You can read more about the Koh-i-noor diamond here.

The second inscription: “SHĀH JAHĀN, the son of Shāh Jehangir. The Year 1051”

In 1600, the Shah found itself in the hands of the Mongols, who kept it as a spoil of war and sent it to the court of the mighty emperor Akbar the Great in Agra. In 1605, after Akbar’s death, the diamond was inherited by his son and successor, Jehangir. In 1628, the diamond was given as a gift to Emperor Shah Jahan. The second inscription was carved on it 13 years later. Jahan’s son ordered the diamond to be placed in the upper part of the backrest of his throne. The Shah was encircled with other diamonds, rubies and emeralds, which created a spectacular view, indicating how mighty and powerful the emperor was.

The third inscription: “The ruler of the Qajar FATH ALI Shah SULTAN. The YEAR 1242”

The second and third inscriptions are separated by almost 200 years, and during that time the Shah diamond passed from one ruler to another. In 1739, it was seized by Mahammad Nadir Shah, a great Iranian ruler who invaded northern India in order to pillage the legendary riches of Agra and Delhi. The value of the pillaged goods was so enormous that Nadir Shah could afford exempting his people from taxes for at least 3 years.
The priceless gems included not only the Shah diamond from the imperial throne but also other famous diamonds, as for example the Koh-i-Noor, Darya-i-Nur and Nur-ul-Ain. Nadir became the new owner of the gem, and Persia was the Shah’s new home. Eight years later, the ruler was killed by his own soldiers, and his death brought about the decay of the Iranian state and many years of war for its unimaginable wealth. The treasure changed hands often, but it was eventually taken by Fath Ali Shah, who ordered the third inscription. 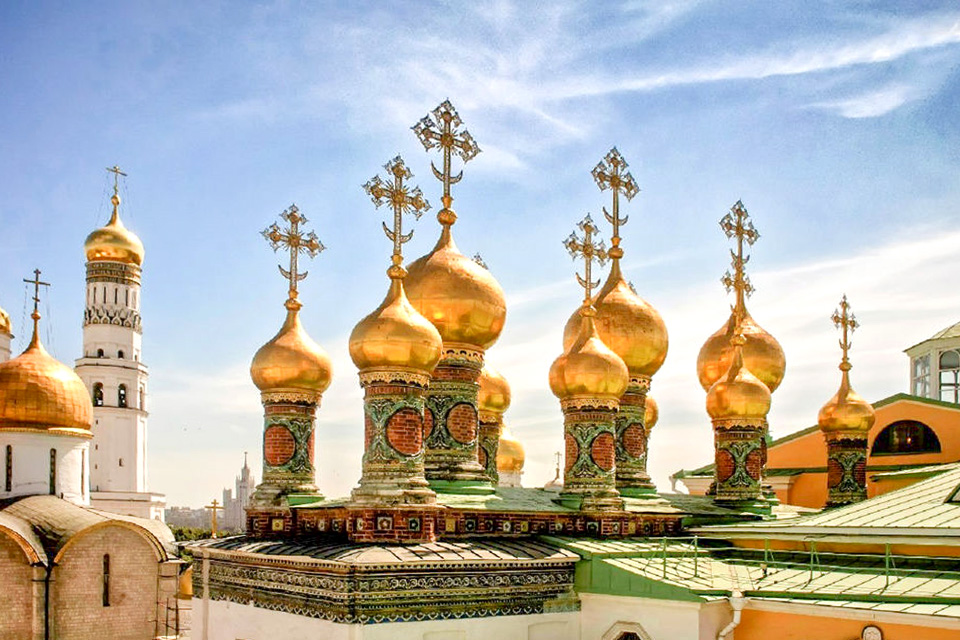 The last chapter of the great Shah diamond began in 1829. As a result of local disputes in the Iranian capital, Tehran, Alexander Sergeyevich Griboyedov, a Russian diplomat and writer, was murdered. The Russian government demanded a severe penalty for those responsible for the crime. In his attempt to de-escalate the situation and redeem guilt, Fath Ali Shah sent a delegation to Saint Petersburg with a gift for Tsar Nicholas I. The gift was, of course, the flawless Shah diamond. The Tsar accepted the stone, and thus one of the most distinguishable diamonds in the world was added to the Kremlin’s diamond collection. Today, the Shah diamond is found in the Russian collection and everyone can admire it among the fabulous jewels on display in the Kremlin Armoury. You can read more about the collection in Moscow here.