This time we go west to take a closer look at the greatest exhibits from the collections of the royal families in France and Great Britain.

The largest cut diamond in the world awaits us in the Tower of London, and one of the greatest collections of jewelry is in the Louvre. It will be a journey in the footsteps of the finest jewelry works that can be admired in Europe!

As tireless seekers of diamond icons, we leave Big Ben and Buckingham Palace behind and head straight for the Tower of London. It is in this fortress palace, built in 1078 for William the Conqueror, that the largest collection of royal diamonds has been stored and exhibited here since the middle of the 17th century. 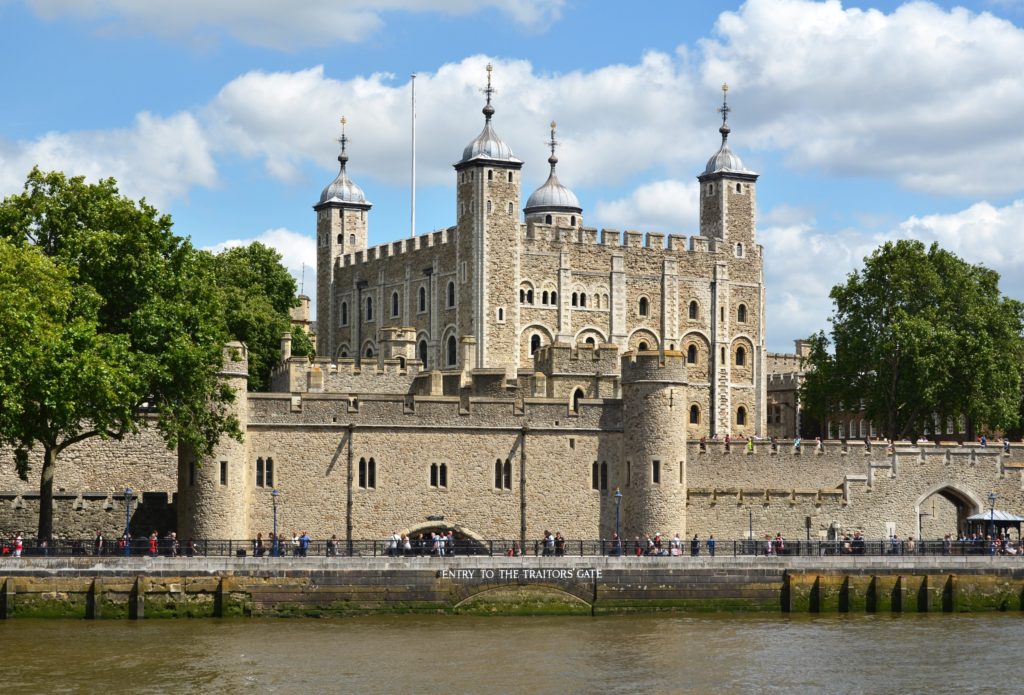 With the scene from Sherlock Holmes in front of our eyes, in which James Moriarty, the greatest enemy of the famous detective, breaks into the Tower to “try on” the royal insignia, we limit ourselves to merely watching them, hoping for equally spectacular experiences.
The size and importance of this invaluable collection can be seen in officially published figures. The chambers behind the walls of the fortress hide more than 23,000 precious stones, which are still used today during royal ceremonies. The Crown Jewels collection, exhibited in its present form, has been seen by over 30 million visitors. They are said to be the most visited monuments in London and one of the most popular in the world. Let’s take a closer look at what shines the brightest among the countless attractions in London.

The heart of the collection is undoubtedly the royal regalia, with the royal scepter at the head, which since 1910 has been adorned with the largest cut diamond in the world, Cullinan I (530.20 ct). Next to the scepter you can also admire the Imperial State Crown with a polished pillow-shaped dazzling Cullinan II (317.40 ct), accompanied by rubies, sapphires, emeralds and over 250 pearls. (the history of the biggest diamond in the world you can read here)
No less delightful is the Queen Mother’s Crown made in 1837. Its most precious decoration is the famous Koh-i-Noor diamond, one of the largest cut diamonds in the world (108.93 ct), set in a cross on a rim of the crown. Because for centuries men have fought for its possession, on whom the stone is said to have brought misfortune, from the moment of its arrival in Great Britain, Koh-i-Noor was worn exclusively by women—Queen Victoria, Queen Alexandra, Queen Mary and Queen Elizabeth (the history of Koh-i-Noor you can read here)
Weighing 2.23 kg, the golden St. Edward’s Crown is considered to be the most important and “holiest” of all the crowns of the empire, and although it is not decorated with diamonds, it is one of the most beautiful exhibits in the royal collection. It was made on the occasion of the coronation of Charles II and replaced the medieval crown cast in 1649. It is decorated with 444 precious and semi-precious stones, including sapphires, amethysts, rubies and topazes.

In addition to the breathtaking coronation regalia, the Tower of London also holds dozens of other items related to the history of the monarchy, including swords, maces and religious exhibits. Particularly noteworthy are the beautiful coronation robes, last worn by Queen Elizabeth II in 1953.

Remaining under impression by the collections of the British royal family, we move to Paris, where the treasures of the French monarchy await us. The French crown jewels are now a remnant of the magnificent collections sold by the Third French Republic at the end of the 19th century. The preserved exhibits are mainly historical crowns, diadems and necklaces, mostly exhibited in the majestic Apollo Gallery in the Louvre. Among the preserved and exhibited items are a few exceptional diamonds for which we came here.

One of the most important stones in the Louvre collection is undoubtedly the Regent diamond, which is considered to be among the most perfect in terms of color and purity. For centuries it remained one of the most precious treasures of the monarchy and adorned all the crowned heads of France.
At the time of its mining in India in 1698, it weighed 426 ct. In 1702, it arrived in England, where works on its splitting were conducted for two years. Some of the separated stones were sold, and the Regent in its present shape is a stone with a perfect brilliant cut and a weight of 164.40 ct.

The Sancy diamond, weighing 55.23 ct, is another stone worth stopping at for a moment. Its turbulent history was marked by numerous travels between France and Britain, until the diamond was eventually lost during the Revolution. It stayed in private hands for decades and only in 1976 did it return to the state. Another diamond from the French crown jewels, Hortense, had a similar story. This 20 carat peach-colored beauty disappeared twice during the Revolution.
Stones exhibited without mountings are only a part of the fabulous collections in the Apollo Gallery. The indescribably beautiful jewelry, for which the French monarchy was famous all over the world, is a completely separate chapter.

One of the first exhibits presented to the public are the earrings and necklace given to Marie Louise by Napoleon I on the occasion of their wedding in 1810. 1,306 diamonds and 44 emeralds make this unique jewelry set the most outstanding showcase of the craftsmanship of Napoleon’s personal jeweler, François Nitot. It is impossible to pass indifferently by such works as the crown of Empress Eugenia, a massive brooch decorated with two diamonds in the shape of hearts, or the earrings, brooches, necklace and tiara originally belonging to Queen Hortense, decorated with diamonds and sapphires. This invaluable collection will not disappoint anyone who appreciates beauty and craftsmanship perfection visible in every detail.